MY BROTHER rings. Out of the blue. From interstate, where he’s lived more than half his life.

“I’ve been tidying the garage,” he says with a quiet enthusiasm, “and I’ve found your old stamp albums.”

I reply, with a smile, that I’m mildly curious but not exactly captivated about re-visiting an apparent childhood hobby from close to 50 years ago. “I don’t really remember collecting stamps.”

“Well, you’d written your name on the two albums, inside the front cover.” A chuckle comes down the line.

“You kept a running tally of how many stamps you had. You wrote numbers and dates on the inside back cover of one of the albums.”

I am holding the phone to my ear and trying to make sense of this new-found (so to speak) hobby. I’m stumped. Stamps?

“I’ll put the albums in the mail. Then let me know what you want to do with them. You know, I collected stamps for a while.”

We say goodbye. I was a stamp collector? And my brother? Nearly 50 years ago? It’s not everyday your brother rings. And tells you about a part of your past you’d forgotten.

THESE DAYS there is next to no anticipation in walking to the letter-box to see if the mail has arrived. There’s not much in there but bills, bills, and more bills. Maybe a birthday card from an elderly aunt. A Christmas card from interstate. Rarely a letter, a hand-written letter.

Australia Post recently wrote to me (well, to myself and millions of other householders) about changes to its services. ‘Australians are becoming less reliant on letters as a form of communication…’ No surprises there. ‘Business and government now account for 97% of all letters sent in Australia.’ No wonder the walk to the letter-box is more chore than treat.

The letter from Australia Post is a softener about changes to its services. It talks about being able to ‘Activate your free MyPost Digital Mailbox’. It talks about ‘a new non-urgent “Regular” service that will take two days longer to deliver than the current delivery timetable for letters’. And the price of stamps will increase. Not ideal, I think. Not exactly an improvement, an upgrade in services. But I can wait two days longer for my letters to arrive. My friends can wait.

Two or three times a year I write letters to Paul, to Brian, to Gina, to Clare, to Stephen. They don’t live far away. Paul is five minutes by pushbike. Stephen another ten minutes of pedalling. Brian, Gina and Clare about half-an-hour by car, depending on the traffic in their suburbs.

They’ll be okay waiting another day or two. Time for the stamp (a pretty picture of a kookaburra, or a kangaroo or a koala) to stick to the envelope. Time for the ink to dry on the paper, for the hand-written words to settle on the pages. Time for the stories and anecdotes and questions and wonderings and greetings and goodbyes to nestle inside before being set free.

MY BROTHER posts the two stamp albums. In An Australia Post ‘Padded Bag Extra Strength Postpak’. There is no stamp with a pretty picture, but a receipt affixed to the top right-hand corner telling me it has cost my brother $3.50 to post the 0.384kg parcel. The parcel fills up the letter-box, spilling the bills onto the ground.

There are two identical cardboard-covered stamp albums. Glorified exercise books really. With thin red canvas spines. And, yes, they look a little familiar now. And, yes, there is my name – and address and phone number – in primary-school hand-writing. ‘…6 Cremona St Mentone, Melb Victoria…93 6499.’

The albums do not spark memories about stamp collecting, they do not send me into fits of philatelist nostalgia. Rather, they raise minor, passing questions. Why did I get interested in stamps? Who introduced me to the idea? My brother? A cousin, a neighbour? Why did I lose interest after about 18 months? What other interests might I have had, that have been lost down the line? (The tallying of numbers may have been a precursor to, 40 years later, becoming a scoreboard enthusiast. Yes, scoreboards.)

As for the stamps in the two albums, they are nothing to get excited about, as far as I can tell. There are 330 stamps in one album, and 90 in the other. Most are from Australia. Pictures of The Queen, and native flora and fauna. Flowers, birds, marsupials. The stamps that first catch my eye, all these years on, are those of fish: coral fish, humbug fish, anemone fish. I am a snorkeller and have seen some of these over summer.

There are some stamps from overseas, bought at the Mentone newsagent maybe, or by posting a money coupon to a stamp collecting business. Certainly, no-one ever wrote to our family from overseas back in the late 1960s. Not from Argentina, Austria, Belgium, Brazil, Bulgaria, Canada, Chile, China, Holland, Gibraltar…Norway, Peru, Spain, United States of America. The ‘Advice to Collectors’ page of the albums says, ‘Study your stamps and those of your friends, and you will increase your knowledge of history, geography and many other subjects.’

MY BROTHER has enclosed a letter with the stamp albums. Black ink on white paper. Neat left-handed writing, the words leaning gracefully from left to right. He notes that many of the stamps are actually from the 1980s, when he resumed his childhood hobby. (Neither of us were living at home by then.) ‘I think I began sticking stamps in any space I could find – and hence many 1980s stamps in your albums.’

He recommends a particular Australian stamp, of the 1888 Charles Conder beach painting A Holiday At Mentone; painted some 80 years before my brother and I and our siblings lived in Mentone, the beach only a few minutes from Cremona St.

On the same page as the $5 Charles Conder stamp is the last Australian stamp to be stuck into the second of these humble collections. It is a 33 cent stamp placed there by my brother in the 1980s. It is not a stamp of The Queen. It is not of a bird or a fish or a flower or a marsupial. Nor is it a picture of the past, a commemorative stamp. It is rather more prescient.

VIA E-MAIL I learn from my brother that he collected stamps throughout his childhood and into the early 1990s, into his mid-30s. He bought collectors’ stamps on trips to Fiji, Singapore, Thailand and Cambodia. ‘In the early 90s a friend of a Cuban friend gave me a very special gift – a Cuban stamp book post revolution, with about one fifth all stamps inside.’ My brother’s stamp albums have travelled Australia with him: Mentone, Geelong, Alice Springs, Cairns, Sydney. It’s not every day your brother emails and tells you about a part of his past you’d never known.

THE LAST Australian stamp in the stamp albums that I never thought I had is not of a kookaburra or The Queen or a historical moment. It is abstract. It is futuristic. It was probably very mysterious back in the 1980s. It suggests global communication. Fast, global communication. It suggests change. It is a stamp that suggests the demise of stamps and letters, especially hand-written letters. It says, on the bottom right hand corner, ‘ELECTRONIC MAIL’. 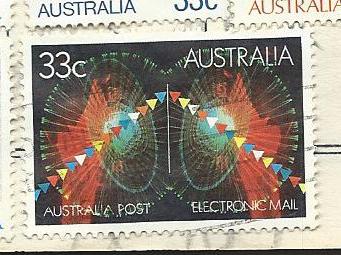