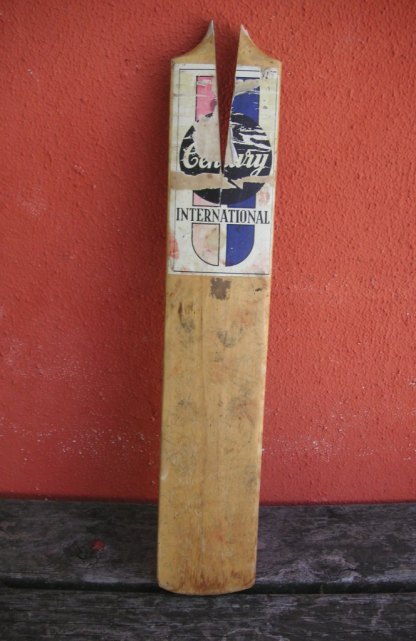 Julie and I were married 25 years ago on a sunny Saturday afternoon: 16 January 1988.

We had a picnic wedding in a big park in Geelong, just up from Eastern Beach, not far from the local botanical gardens.

It was a BYO occasion, with guests invited to bring picnic lunches, folding chairs, picnic rugs, sunblock. You could call it a cheap wedding, I suppose. We called it informal, natural, true.

Someone (possibly the groom) brought along a cheap cricket bat, a Century International. It had a few red marks on it, probably from driveway or backyard games.  After the ceremony and the formalities (of which there were few), the bat appeared and soon half-a-dozen of us (including the groom, in his wedding attire of new yellow t-shirt, new blue strides, and new white shoes) were hitting a tennis ball between the trees fielding at mid-off, cover, and mid-on.  A friend of Julie’s (Ross) was bowling, a mate of mine (Steve) was keeping, two young nephews (Tony and Dominic) were chasing everything.

It was, you will remember, a cheap bat and within a few overs The Wedding Day Test Match came to an abrupt end when the blade of the Century International parted ways with the splice and the handle.

Steve picked up the blade and wrote VIN AND JULIE 16/1/1988 in blue biro in the middle of the timber – the sweet spot of a better bat. Steve then passed the bat around to the wedding guests.

Julie and I can still read many of the signatures: some of Julie’s aunts (Joyce, Loris, Kath, Mollie), two of her uncles (Ralph and Russell), two of my aunties (Majella and Mary).

Uncle Ralph, a handy leg-spinner in his day, signed near the edge of the timber, about half-way down the bat.

The names of friends and couples are still legible: Kevin and Lauretta, Peter and Jo, Greg and Robyn, Ross and Keryn, Bill and Carol, Steve and Jenny, Robbo and Sharon.

Ron and Margaret, my parents’ names, are at the toe of the bat, as is Julie’s father’s, in capital letters. LES MERRITT.

Many of the older signatories have passed away. Mum and Dad, Julie’s dad. Most of the aunts and uncles. But my aunties Majella and Mary, whose neat signatures are near the top and the bottom of the broken bat respectively, are both alive. Mary is only two boundaries from making a century, though she’ll have to score the runs in singles.

Of our friends, most are still married. One man was widowed only five years after our wedding day. Another now has tests every three months for his prostate cancer. A bloke I haven’t seen for a decade or more has just had triple-bypass surgery.

I was good mates with Steve for over another 20 or so years until the friendship started drifting. For a while the Boxing Day Test was a reminder to get together. But one year one of us didn’t call the other…

At the end of the day everyone packed their picnics away and wished the newlyweds well.

Julie and I drove to Daylesford. Ahead of us was our life together. In the boot were picnic leftovers and wedding gifts. And half a cricket bat.

2038 seems like a long way off – further away than 1988 –  but Julie and I trust we’ll be bringing up our 50 year partnership then.  We’ll celebrate quietly, maybe with a picnic, where we’ll raise our bat to the crowd, the dwindling crowd. And then continue to face life and whatever it bowls up to us.

This story first appeared on the following websites: Australian Rules, Wicket To Wicket, and The Footy Almanac.