IT IS the day before Australia Day 2012  and a man is asking me the name of this part of the country. The traditional name.

It is six in the morning, on the beach. Dawn.

“I think this is Wathaurong country,” I offer, none too confident.

“Wat-au-rung,” he replies. “Wat-au-rung.” At first I think he might be repeating me, but later I wonder if he was correcting me.

He tells me the name of his own country, way over on the other side of this land, but I can’t catch all the syllables and the sounds. They are like eels, slipping through fingers and disappearing back into a river.

“My country is in the Swan Valley, in Western Australia,” the man says, smiling.

I’ve never been to Western Australia, but I know the capital city is on the Swan River.

“Yes,” the man responds, “Swan River runs through Perth.” And then: “I saw a black swan first thing this morning. Here. It reminded me of my country. Made me happy.”

He explains that the name of his country means Land of Many Breasts.

He tells me his name: Steven. I tell him mine and we shake hands. I start undressing for my quick dip.

“Steven Edward Roberts is my full name,” he adds. “And Steven John Jackson. And Steven Michael Thomson. And Steven Adam Wright.” The man, maybe in his mid-twenties, with gingery hair, smiles with each variation.

I’m not sure whether, or how, to ask why he has so many names.

It is a lot to take in at this time of day, just before my daily swim, just after I’ve got off my bike.

“My traditional name is Djididjidi. It means willie wagtail.”

I am down to my togs now and, motioning towards the water, tell him that I won’t be long. Just a few minutes.

“I would like to talk to you more,” the man says. “You are knowledgeable.”

Far from it, I think, stepping into the shallows of this suburban Melbourne beach. Far from knowledgeable.

I’m not even sure if this is Wathaurong country. Isn’t it further west, down the coast? What other traditional names of country do I know? Woiworung. Wurundjeri. Kulin. Yorta Yorta. Pitjantjatjara. Not many. And are these names of countries or of clans or languages or nations?

I was born in Mordialloc, I went to school in Geelong, I cross the Yarra River every day on my way to work. I like the rhythm of placenames like Murrumbeena and Murgheboluc, Moorabool and Barrabool. I like the sounds of Wollongong and Maribyrnong, of Wangaratta and Tallangatta. But what do these placenames, these words, really mean?

Walking back to shore I see a man in silhouette exercising, stretching his arms high. About to go for a swim, I presume.

Reaching my bike and clothes I see that the silhouette figure, backlit by a streetlight, is Steven. And he is dancing. Steven Edward Roberts is moving to his own rhythm, sometimes standing tall, sometimes crouching low, sometimes skimming across the sand.

As I dry and dress, I wonder how to politely cut short an extended conversation with Steven John Jackson: I sense he might be up for a long chat and, while I’d welcome that, I have to go home, have to have breakfast, have to go to work and clock up more hours before the long weekend.

Stephen Michael Thomson stops dancing and is now chanting quietly, perhaps praying. He is clapping his hands gently, sitting on one of the kiosk benches six or seven metres away. The sun is rising as the locals pass by: walkers, joggers, cyclists, swimmers.

I strap on my helmet, straddle my bike. Steven Adam Wright is smoking now, looking out to the water and into the sun.

I say I’m not sure if Wathaurong is the right name of this country after all.

I say, rather lamely, somewhat unimaginatively, “Have a good day.”

AT  lunchtime I buy a map and a book from a city shop. The map shows more than 300 names of country. Near Perth, the map shows Wajak and Pinjarup and Balardung. Are any of these the name of Djididjidi’s country? I can’t be sure, for the map has a disclaimer: “boundaries are not intended to be exact”.

The boundaries might not be exact, but I can see that I was wrong in telling Djididjidi that the beach where we met is part of Wathaurong country. It is, I can see now, part of Woiworung country – although another reference tells me I live on “the territorial edge of Bunerong and Wurundjeri”, and that the area’s name is Koort Boork (‘place of the sheoaks’.)

On the back of the map are many variations of the 300 names of country. Hundreds and hundreds of them. So many names.

The book I bought is a dictionary simply called Aboriginal Words. Seven hundred pages covering just 17 languages. Looking for more clues to the name of Djididjidi’s country, I find three Nyungar words for breast: biip, biba, bibi. And I find two more Nyungar words for wagtail: minidjt, nyidangitj. The letters are easier to hold than the morning’s slippery eels. They are fixed there on the page, even if I’m still only guessing the sounds and the syllables.

It is a lot to take in. These things can take time. Forever, probably.

I pass places I’ve always known as Freshwater Creek and Bellbrae and Anglesea and Aireys Inlet. Among the food and the clothes I packed for the long weekend are a new map and a new book.

It is, some say, Australia Day. 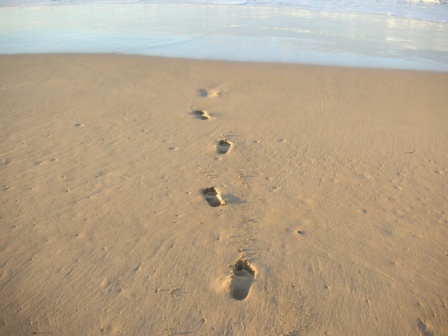