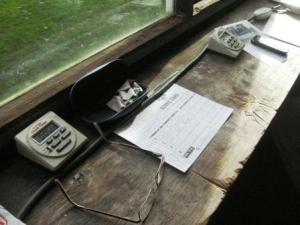 I started with some vaguely-remembered facts. I added some fiction…

HE TOLD  the story while watching the game. The umpires especially. All seven of them. He watched for their signals and responded accordingly, pressing buttons on the timekeeper’s digital clock. Time on. Time off. Time back on again. His eyes watched the game while his right-hand index finger recorded its pulse.

He told the story in short phrases, the umpires’ signals and whistles like commas, like full stops.

About 30 years ago his elderly neighbour Jack invited him to a game.

“He’d been the timekeeper forever.” Ball-up on the wing. Time off. “It was his life.” Time back on.

“He was keen to show me the ropes.” A free kick. In the back.

As the quarter neared its end he paused his story and dueted with his opposition colleague. “Ten seconds to go.”

At quarter-time the two men fill out their timekeeping cards, check their phones for scores from other games, texted by colleagues across the suburbs. Jokes are sent back and forth, and around the grounds.

Within a few minutes, prompted by the timekeepers’ siren, the players have dispersed from their coaches and taken up their magnetic board positions. The central umpire holds the ball aloft. Bounces it in the circle.  As red leather meets green grass an index finger presses.

“A few days after Jack took me under his wing he died, just like that.” Out of bounds. “In his backyard.”

“Maybe he knew his time was up. Maybe not.” Boundary throw-in.

“The players looked odd in their suits and ties.” Around the neck. “I remember thinking, ‘Not the time for autographs’.”

“Six of them carried Jack’s coffin on their shoulders.” Holding the man. “Down the aisle of the church and outside to the hearse. While the club song was playing.”

During the long break the two-timing men pour tea from a thermos, unwrap sandwiches, check other scores. Browse The Record. And chat without the game’s interruptions. They talk analogue clocks, flat batteries, dud sirens, trigger-happy colleagues.

They also talk of the pace of the game, of the number of umpires, of the rule changes. “Does anybody ever ask us, the timekeepers, about these things?” says his mate. “Anybody?”

The ground is clear of the kick-to-kick kids, the timekeepers have recorded the return of the umpires and the players for the second half. The lid is back on the thermos.

“The next game, the players are wearing black armbands for Jack. And there I am, in the timekeepers’ room.” Holding the ball. Fifty metre penalty.

“Fifteen years old and I’m the club’s timekeeper.” Push in the back. “Seniors and reserves.”  Forty metres out.

As the game opens up (“About time the umpies put away their whistles.”) he talks of close games, home and away games, of travelling with the teams. Interstate games even. “Carara in the 1980s!”

Three-quarter time. Home team is eight goals up. The men drink the last of their tea. Check scores from elsewhere. Start talking next week’s games.

Final quarter. Centre bounce. “In some ways I hardly knew Jack at all, of course.”  Mark, thirty metres out. “He died a long time ago.” Right in front. “In other ways I feel I’ve known him all my life.”

This story is also published on The Footy Almanac site.